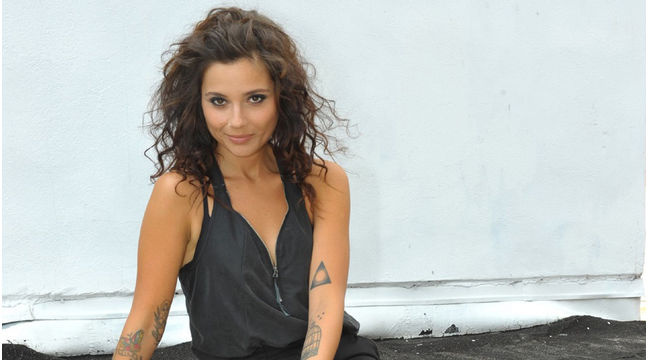 …specifically for her pride and belief in herself, as Linda Marlen Runge revealed in an interview. As Anni Brehme, you can see the Berlin-based daily in GZSZ. We talked to her about music, the music industry and the soundtrack of her life.

Linda Marlen Runge is perfect as part of the “Telekom Street Gigs” band contest, as a mentor for the participants and winner bands, not only because of her musical role as Anni Brehme in the RTL daily soap “GZSZ” but also because in Runge’s private life, she has used music and art as a musician for years. Long before her commitment to acting in GZSZ, she stood on stages and travelled the road, living out her passion for music. Then came the soap and a new job, which has left her very busy. Her enthusiasm for it, even to produce rock songs, has not been lost. On the contrary, Linda Marlen Runge brings a passion for acting along with the music under one roof – and continues with her ​​band on stage.

Looking at her resume shows that her interests also include: Linda Marlen knows what it means to work as a newcomer musician who is actively working on a breakthrough. And to not lose the belief in yourself. So it is natural for her, with and despite her success in GZSZ, to stand by the new bands in the contest with help and advice. Since 2007, the “Street Gigs” events offer cool live concerts. And for avid fans from both established, as well (yet) unknown acts. In this year’s contest the bands could win a live performance in GZSZ – of course in the “masonry”. And this honor went to the winning band “Schafe & Wölfe”, who were given 43 percent of the vote. Filming of the episode, in which the Indietronic duo may be seen on stage, is already complete – it airs on Friday, August 22. (19.40 clock, RTL).

Linda, in your official video on the GZSZ page, I’ve read that you have earned your first money busking. Is it dear to your heart, to support still relatively unknown bands – for example in the co-op between GZSZ and the “Telekom Street Gigs” project?
Yes, of course, obviously! I know how hard it is to be the “newcomer” with a band. These days it is almost impossible if you make music that is not 08/15. Every day I still fight with my own band, despite the current success with GZSZ, through the music business. It’s hard when you’re different. The industry wants nothing that has not been soft flushed and crushed by the mainstream mill. Because it’s not about music, but as the name “music industry” suggests, money and nothing else.

This fight is a musician’s first priority. And, accordingly, you have to stick together and support each other. Although GZSZ as a platform for music of many – especially of musicians – will not be taken seriously, I can only say again: If you do something that is good, and you stand behind it, then the platform doesn’t matter! Because the people who understand music are already listening. People are just stereotypically controlled – if it comes from a soap, then it can’t be good. Total bullshit! Even GZSZ is no longer so cliche as it was.

The “Street Gigs” contest had very different bands present: for reggae there was “Miwata”, Neo-Pop by “Luis Laserpower” and the winner, Indietronic band “Schafe & Wölfe”. Was there a genre that you would listen to privately? And what convinced you in the case of “Schafe & Wölfe”?
Quite honestly, there was no music that I  would listen to privately. But that doesn’t matter. If something is authentic, it convinces me. I don’t have to have on my iPod. And I also won’t change the channel if it comes on the radio, but I can enjoy it, listen to it and perhaps learn something from it. “Schafe & Wölfe” were from the beginning one of my favorites. Why? Because they are real! They are totally cool guys who do not care what others think of them. I’ve interviewed the two and it was so funny, so easy, so free: Just as it should be. Guys with a sense of humor who are pursuing ambitions of what they love – without getting wound up in it. And without the fun of losing seriousness. Thank You. Give me that. A lot of luck!

What was the last band / artist you’ve discovered?
Uh, difficult. But the last band that I have discovered for myself, is actually not a new band, but an old one – and “Mothers Finest”. Which is almost unknown, but I can recommend it. The last “new” band that I liked is “Warpaint” with their latest album. The song “Love is to Die” has been with me for a while every day. The last album that blew me away was, Jack White’s “Lazaretto”. I am anyway – I think – the largest Jack White fan on planet Earth! And when the record came out, I ordered it immediately and then alone at night held a listening party for myself. Since then I listen to it up and down. Is not boring.

Incidentally, I was surprised by your model statement: Marlene Dietrich. How come? The Grand Dame/Diva/Icon and street music – nothing could be further…
How so? Even Marlene has started at the bottom and thought she was too different to ever be successful. And Édith Piaf stood on the street and sung her songs – so please excuse me, but: The statement is thoughtless. And the answer to the question “How come?” is simple: I admire Marlene. For the way she has lived and for the pride she kept until the last moment. For what she has done, even though no one believed in her. In addition she also kept her dark side despite her beauty – that makes a woman. Everyone has a good and a dark side. Those who try and hide their dark side don’t spark my interest.

Which artists define the “Soundtrack of your Life?”
The question is the most horrible one that you can ask. But: Coincidentally, I recently just put together this soundtrack, for my band. Each member had to select the ten songs that have inspired him to play in a band. So this is a very intimate response. My personal mixtape that has moved me to succeed in school and hang around me in rehearsal rooms: