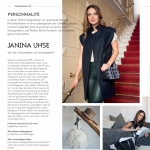 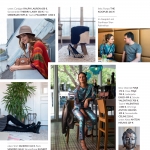 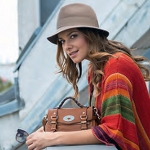 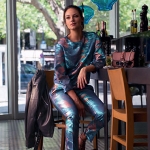 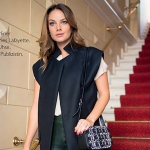 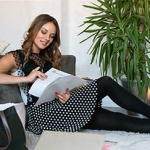 Janina was born 1989 in Husum, into a carnie family, but she found her true passion at an early age: Acting. She got her first part at the tender age of 9, on the show “Die Kinder vom Alstertal”. It was the beginning of her career, since soon after various TV roles followed.  Her big break as an actress came in 2008, on the hit show “Gute Zeite Schlechte Zeiten”, in the role of Jasmin Flemming, who enchanted viewers with her likeable charisma nationwide. But the beautiful actress doesn’t rest on her success, in 2012 she went to Los Angeles for an acting workshop. As a patron of the association “Jungundjetzt” (Young and Now) she is also very committed to social issues. With her open and enchanting nature, Janina convinces as an actress, and most of all as a person, we’re going to hear a lot more from her in the future!”

To me France tastes like … Iced Sancerre
My oldest piece of clothing … A pair of pyjamas from my childhood.
My strangest possession … A brown synthetic long hair wig. I have no idea how it ended up in my apartment.
My favourite piece of clothing at the moment … Possibly my best purchase ever: A black leather biker style jacket
Me in three words … Happy, travel-loving, family person