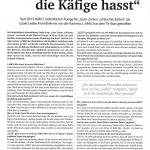 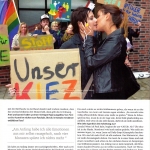 How did you get the part of Anni?
(laughing) I was in Mexico, and broke, when I met one of the writers of GZSZ online. More as a joke, I asked him to get me a job as an extra on the show when I’m back in Germany. I didn’t hear about that from him though. Soon after, I flew back to Germany, after all, and he wrote me, saying my character was finished now, and that he couldn’t promise me anything but wished me good luck for the audition. With a little party hangover, I went to Potsdam. Two weeks later the phone rang, and they said they wanted me for the role of “Anni” in the main cast. Unbelievable!

But I’m sure the regular pay check wasn’t the only reason you took on the part?
No, I saw it was a lesbian character part. I knew if I’d get to play it the way I imagined it, it could help a lot of girls out there to accept themselves.

How much of Linda do you think is in Anni, and vice versa?
Quite a lot. The basic characteristics they give us to get into the role don’t suffice for more than two weeks. And then you have to give a lot of yourself. I’m Anni for almost more of the time than I am Linda,
because I’m at the studio all day, portraying this character. You actually have to be careful not to let the two blend into each other too much.

GZSZ has been on the air for 22 years. What was it like to join this seasoned team as a new actress on the show?
Strange. I’ve been on stage for 16 years as a musician, and everybody thinks I’m anything but shy. Quite the opposite. At first, I kept to myself on GZSZ and just observed. After all, it was a different world. But this team is so great that I felt a part of it within the first month.

You’re portraying a couple with Janina Uhse a.k.a. Jasmin Flemming. How is the chemistry between you two?
Originally, Anni was supposed to end up with a different character. But during an audition scene, Janina and I clicked right away.
I guess they liked our chemistry. By now we’ve become a well tuned team.

Over 3 million people watch GZSZ every day. Which also means the actors are very much in the public eye. How do you deal with that?
I have a pretty good tunnel vision. I’m not the kind of person who revels in fame, and I always act the same, really. But when you’re out partying at night, and you don’t look around often enough, stupid things happen sometimes.

I take it you’re alluding to an internet celeb magazine filming you kissing a colleague of yours with a hidden camera a few weeks ago?
Among other things. It was no big deal for us. I honestly didn’t notice somebody with a camera hovering over us (laughing). And then they tried to create a scandal out of this. But the joke was, the fans thought it was cool, anyway, and said we should do whatever we like. I didn’t really care, to be honest. When I feel like doing something, I do it.

How did your friends react to you being on GZSZ?
I was in this artists milieu, and I would always say: I’ll never do mainstream! But GZSZ is kind of a classic. On this approach I tried to “confess” it to my friends. Funnily enough, most of them outed themselves, saying they like to relax at night watching the show. (laughs)

Did you watch GZSZ before you joined the show?
No, I was travelling too much. I used to watch “Marienhof” as a kid. From the age of 10 to 14 I was a Billi fan. (laughs) I thought she was super cool. I still have those Linda Perry glasses!

And now you’re Anni. Do you feel responsibility playing her?
Definitely. I suffered for years because I wasn’t like the other girls. And then I painted my fingernails light blue and put braces in my hair, until I stood in front of the mirror and laughed at myself. And I thought: Screw it, you are the way you are. I can have a good time being by myself, and the people who want nothing to do with me…fine, don’t then. I love Anni, because she shows other girls that that’s possible.

How much input do you have when you’re shooting scenes about the details you think define Anni?
A lot. When I state plausibly that Anni would never join the others in their cute excitement about Nele having a new boyfriend, a glass of prosecco in hand, but would stand by herself instead, with a bottle of beer in her hand, dryly remarking that it’s gonna last for just 3 months at the most anyway, I can do just that.

There’s a lot of hype around Anni and Jasmin. You have fans from Asia to Australia. Do you keep contact with your female fans?
At first I always replied. But after two months I had to disable the private message option on FB, because it got out of hand. But when somebody goes to great pains, I think it would be wrong if I didn’t at least say thanks. But it should stay within certain boundaries. I don’t want the girls to do something they might regret afterwards once they’re not crushing on me any more.

Is it important to you that lesbians accept Anni?
For me, the worst thing would be if they said about the Anni & Jasmin story: “That’s an obviously straight girl attempting to portray a lesbian.” When you’re an actor, you have to be able to make a character believable. And if you can’t do that, you shouldn’t take on the part.”

What does your working day look like?
(sighs) If I’m unlucky, my day starts at 4:30. By 7:00 I’m in hair & make up. Sometimes we have night shoots. What annoys me the most is when people look down on soap actors. Often we’re more professional than the others. The hardest part is that we don’t shoot in chronological order. One scene you’re goofing around with someone,
and in the next scene something terrible has happened to that character. At first, I had the ambition to draw all emotions from within, one-hundred percent. After four months I sat on the floor in my apartment thinking I’m not feeling anything any more now, because I let it all out.

Who helps you prevent burnout?
We have coaches, for example Uta Prelle-Köppe. People may know her from her time on “Hinter Gittern”/”Behind bars”. She was on a TV series for 10 years herself. She knows exactly what it’s like for you, and she has so much empathy that she always picks us up.

Daily-Soap is a full time job. But you’re also a passionate musician. How do you make time for everything?
It’s hard. I write a lot, but I can’t do anything with it. I’m going on vacation to Asia now, and I feel bad, because I should fly to Mexico to my band.But I’ve been working on the show all the time, and during my time off I went on tour with my band. I just have to relax now and recharge my batteries.

Your band lives in Mexico. How do you work on your music when you’re here?
Over the internet. My guitarist and I met in Mexico at a party and talked for maybe two minutes. After that I went back to Berlin. Then I found his music online and thought he was great. He sent me an instrumental, I added vocals and sent it back. After six months we had finished a demo album this way. And then the question was: Am I gonna do more with this? So pretty much over night, I sublet my room in a shared apartment for three months and went to Mexico. Three months turned into two years, because we worked our way to performing as festival-head liners within half a year. My GZSZ fans love Lejana too now, but unfortunately I don’t have time for the band.

Your second band project is Blood & Honey. How did that come about?
Blood & Honey happened because Tim Williams, who plays Kurt LeRoy on GZSZ, introduced us. Tim and I hit it off right away. He introduced me to his irish buddy, a great guitarist, and just a week later we recorded our first demo. For me, music has to do with spiritual kinship.

Do you want to be a full time musician one day? It’s hard to make your way in the music industry.
If the music industry doesn’t want me, I don’t want the music industry. I’m not only a musician if I’m successful. Sure, Anni plays music on the show too now. There already was the “Far Away” single release, and there might be more in the future. But here I can tell the composer of the show what I’d like to do. If I can’t live off music after GZSZ, I’ll go back to working in geriatric care.

What are your wishes for Anni’s future?
I’d love for Anni to learn to have a little more sympathy. You can be honest in a way that doesn’t hurt people. Personally, I’d love it if she got married, because she found the one. The idea appeals to me, because Anni is the kind of person who hates cages.

French Translation (Thanks to Ameliefan05)